1. Create and Use Lists

If you’ve followed a good number of other users, you’ve probably noticed that your main Twitter stream can quickly fill up with a lot of “noise”, sales pitches, or idle banter which makes it difficult to find the stuff you really want to see and/or respond to.

Creating lists is a great way to filter out all that noise.

For instance, you can create lists for Customers, Competitors, Industry Leaders, and Star Wars Addicts.  Next, you simply add folks to the appropriate list.  Then when you want to see what all your fellow Star Wars Junkies have been talking about and sharing on Twitter, you simply select the Star Wars list and everything else is filtered out.

By the way, you can add Twitter users to a list whether you follow them or not.  This can be a good way of keeping tabs on the Twitter activity of your competitors without following them and revealing your stealthy, James Bond 007 spying techniques.

a)      There are a couple of ways to create a new list.  The first way is to click the head and shoulders silhouette next to the search box on your Twitter home page, then click Lists from the drop down menu.  It looks like this: 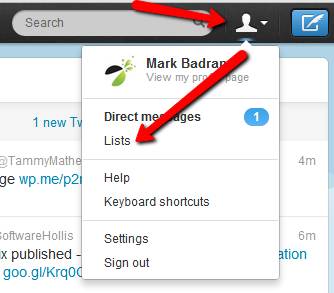 A public list can be useful in conjunction with an event or to create a community that you want to share with others.  As an example, Sage North America (@SageNAmerica) has created a public Sage Summit Twitter list here. 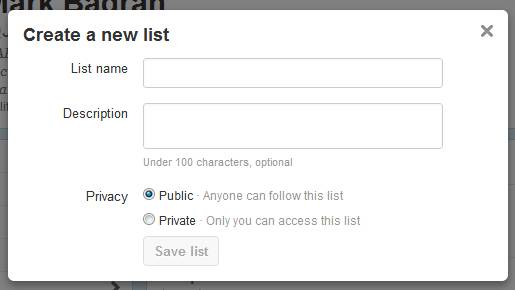 As mentioned above, there is another way to create and manage lists.  Method 2 is to select a Twitter user, click the same head and shoulders silhouette from the pop up box, and select add or remove from lists … like this: 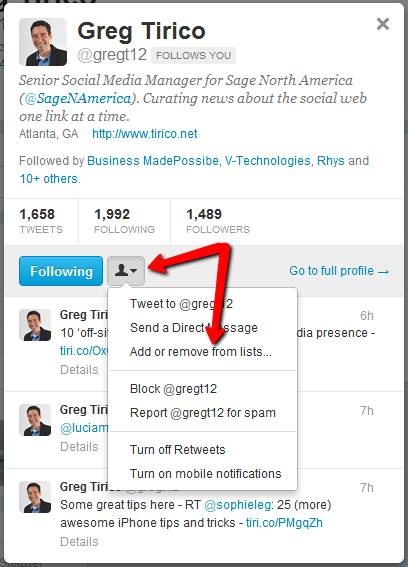 2. Use Buffer or Similar Sharing Tool

One of the things we hear from Sage Partners is “I don’t have time to post things on Twitter.”  But a tool like Buffer makes it easy to just incorporate social sharing into your regular activity online.

Buffer allows you to add tweets to a queue and then automatically sends them out over your specified intervals (twice per day for example – once in the morning, another in the afternoon).  Not only does the built-in buffering process keep you from posting 10 articles in 5 minutes which is enough to annoy anyone, it allows you to perhaps sit down on Monday morning, grab coffee, do some reading online, and share interesting articles or resources for the week.  Queue them all up in one sitting and you’re done with it.

Installing the BufferApp button for Google Chrome, you can share and schedule tweets (and for that matter, LinkedIn or Facebook updates as well) right from the web page or article you’re reading.  That way, you don’t have to launch Twitter in a separate window, copy and paste the article URL, or even touch the Twitter interface.  You can share straight from the page your reading online and let Buffer take care of the rest. Here’s what the BufferApp button looks like:

By the way, there are other tools – like Timely.is for instance – that allow you to schedule tweets.  Just do a Google search on “Twitter Scheduling”, try a couple of services, and use the one you like best.

If you’re sharing an article online, the URL itself can take up most of the 140 characters that Twitter allows for.  That’s why Twitter automatically shortens URL’s for you.

But we also recommend that you consider using, instead, something like Bit.ly.  Because not only does Bit.ly (and similar services like Ow.ly) shorten your URLs, it collects them in an account.  That way, you can go back to Bit.ly, launch the reporting dashboard, see how many clicks have been collected on your shortened URLs, and determine what type of content resonates with your social network.  In other words, it’s a way to quantify your social media effort.

Here are a couple of sample analytics that Bit.ly provides:

4. Stop Selling and Self-Promoting So Much

One of the biggest mistakes you can make is to constantly self-promote or try and sell something with every tweet.  I’ve seen Sage Partner Twitter accounts where every message is a product pitch, link to a webcast, or promo. There’s no sharing involved, no useful articles or resources, and no engagement with other Twitter users … it’s just me me me 24 x 7.  There’s no quicker way to disengage your Twitter followers and undermine any value that social media can have for your brand and business.

Don’t misunderstand, it’s ok to sell and self-promote once in a while.  But not all the time.  Try earning some trust and likeability first (by sharing useful content and engaging other users).  Then, you may find that your sales messages are better-received when sprinkled in among your other helpful tweets.

There are plenty of Twitter accounts that are not run by real people. They’re automated Twitter “Bots” that follow thousands of accounts hoping you’ll automatically follow them back.  Then they proceed to spew out spammy tweets, clog up your Twitter stream, don’t provide any value, and diminish your experience.

So think before you follow or follow back.  Here’s a quick scan you can do to determine whether a Twitter user is human.  Moreover, determine whether or not they share tweets that are on target with your social media goals and provide value … or just clog up your stream with noise.

Scan Their Tweets – do a quick check of some of their recent tweets. This is probably the best way to determine whether a user is worth following or not.  Are they all spammy, self-promotional, repetitive, or just lame and uninteresting?  Then don’t waste your time.

Check The Description and Profile Picture – if they haven’t bothered to upload a profile picture or include a quick description, they probably don’t use Twitter often, don’t have much to say, and aren’t worth following.  And by all means if they’re still sporting the placeholder Egg profile picture, run for the hills.  Here’s why (see Tip #1).

Remember this … for any of the time spent on social media to be worthwhile and to put yourself in a position to potentially turn prospects into customers, you need to connect with the right people!

So what do YOU think? What strategies and tactics have you used to make the most of Twitter?