A few months ago, Greg Tirico (Social Media Manager at Sage) posted an invitation on LinkedIn for Sage partners to share their Twitter handle in order to connect ahead of Sage Summit 2012.  To date, there have been 125 replies.

What’s surprising, though, is how many Sage partners have set up a Twitter account and that’s about as far as they got.

So here are 5 things Sage Partners need to do on Twitter right now.

Replace that egg with a head shot, or even your company logo, today!

See Also: 4 Reasons That Nobody Follows You on Twitter

How does anyone know if they want to follow and engage you on Twitter if they don’t know what you’re all about?  That’s the purpose of providing a short description just below your name (you know, right next to that profile Egg you’re sporting).

Be sure to include a link to your website or blog.  A lot of people will click through to learn more about who you are.

Part of the idea behind using Twitter effectively is to build an audience of “Followers” who’ve opted in to hearing what you’ve got to say, Tweet, or share.

The same goes for Twitter.  You won’t get much value out of sharing and tweeting if you only have a handful of followers.  And while you can find a million-and-one strategies for building a following on Twitter, the easiest way to get started is to simply start following other people.

Once you follow some folks, the power of reciprocation and the law of averages kick in.  Simply put, there will be people that will automatically follow you back.

So you don’t have to put a bunch time into creating or sharing amazing content before starting to build your audience.

In fact, here’s a screenshot (image below) of someone that has managed to generate 1,937 Followers and has never sent a single tweet!  Seems to me that a good percentage of those 2,100+ people she followed simply (and some would say blindly) followed her back. 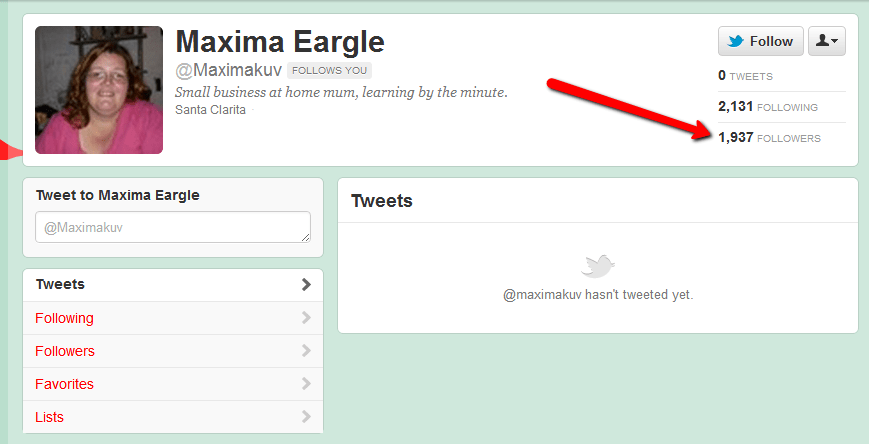 2000+ Followers With No Tweets

Note: If that sounds too simple and you’re interested in a more thoughtful way of building your social network, you should check out “The Social Media Secret That Sage Partners Need to Know“

If you haven’t used Twitter much and are still wary about the whole social media thing, you don’t need to jump head first into the deep end.  Just dip your foot and maybe share or Tweet something once or twice each week.  It won’t take more than 90 seconds of your time.

If you read something that you think your customers, prospects, or colleagues would benefit from reading as well, share it.  It’s that simple … just share some useful stuff online.

You’ll figure out what, when, and how often down the road. But for now, just dip your foot and tweet a couple of things each week.

Because a tweet is limited to 140 characters, people get creative about abbreviating words which has spawned a whole dictionary of Twitter Terminology (Twerminology).  While there is an entire Twitter glossary with hundreds of abbreviations and acronyms, here are some of the most common:

RT – Stands for Retweet which means you are tweeting something that was originally posted by another user.  It’s a way of giving credit to the source of the information you stumbled upon (which presumably came from someone that you’re following on Twitter)

FF – Stands for Follow Friday which is essentially a recommendation. It is used to call attention to a user’s favorite followers and favorite people on Twitter. When you tweet a FF message, you are recommending that your followers also check out the people you mention in your post.

Note of Caution: Don’t overuse hashtags! For more info, check out How to Use Hashtags on Social Media.

@Reply –  The @ symbol typically precedes a Twitter user name in order to reference that person or speak directly to them in your tweet.

As with anything, you often learn best through experience.  So just do it.

P.s. If you want to check out the list that Greg Tirico compiled for Sage Summit (referenced in the opening paragraph of this post), go to: